How to Enable RCS Messaging on Android Smartphones. Want to enable Enable RCS Messaging on your Android? Then, read this article to know. We can’t deny that Apple’s iMessage service is way better than Android’s old-fashioned SMS App. But, recently Google has introduced a new messaging standard called RCS. Though, RCS is already been criticized. Because, RCS Messages are encrypted in transit, but they’re not end-to-end encrypted. Means, RCS Provider (It can be Google or your carrier) can read your messages. So, it puts the RCS system into privacy disadvantage. But still, RCS could still change your text’s way.

Rich Communication Service is known as RCS. It is basically an online communication protocol between smartphone carriers and between carrier and phone. The main aiming of RCS is upgrading your basic SMS App with rich text messages (That’s why it’s also known as SMS+). So, users can transmit multimedia files. Or, in simple words, you can understand, it is a universal version of Apple’s iMessage and WhatsApp.

What RCS does offers?.

RCS protocol does bring many rich features in Google’s Message App. Like, real-time typing indicator, read receipts and does enable chat features like WhatsApp. It allows sharing high-resolution photos and files, GIFs, Location. And, you can even do group chats. Also, users will able to make Audio, video calls with RCS. Within the Message App.

There is another cool feature, that RCS does offer is. Businesses can use this protocol to send package delivery notifications. Like, your boarding pass and train ticket. Ultimately, It’s gonna replace SMS (Short Message Service). Which is still stuck on 160-character limits.

Is RCS Available for Everyone?.

Though, because of carrier dependencies, RCS can’t be available to everyone in one go. Google is slowly rolling out RCS in several countries. But, in some countries like the UK and France. Google is providing RCS directly to Android users. But, on the other hand, in some countries like the US and India. Users must be on a carrier that supports RCS. So the day is far when the RCS will directly available all over the globe. But, thankfully, now you can get RCS Messaging on your Android Device. Even, if your device and Carrier don’t support. With some tweaks, you can Enable RCS messaging on your Android Smartphones.

Enable RCS messaging on your Android.

To get RCS Messaging working in Message App, you have to install a few Apps. If your device does supports RCS. Then, you don’t need to download Carrier Services and Activity Launcher App.

1. First, Download and Install the latest version of the Google Messages App.

2. Open Message app, and, it will ask you to Set Messages App as your default App. So, tap on “SET AS DEFAULT” > Yes. (If you’re already using Google’s Message App. Then, this screen will not appear for you.) 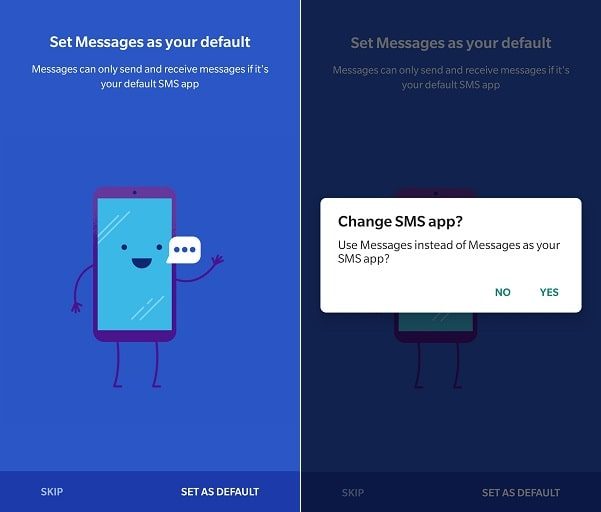 3. Tap on vertical three dots icon, and then choose Settings. 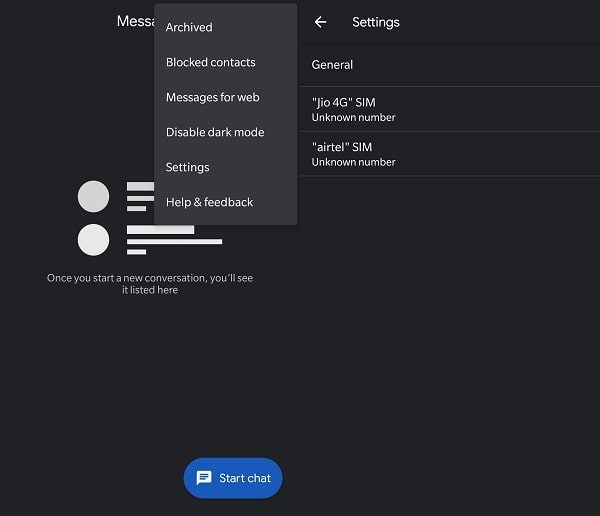 4. In the Settings page, tap on General > Chat Features. Now, Enable chat features by tapping on it. 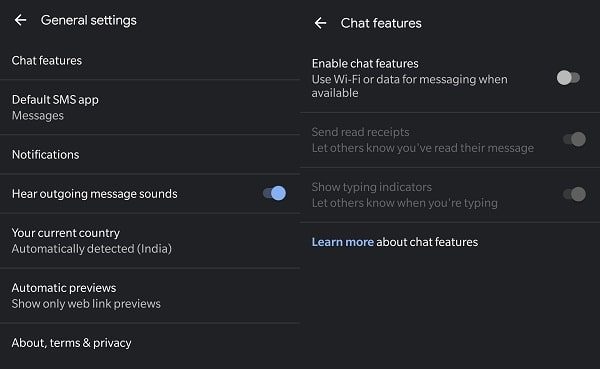 5. The App will now automatically verify your phone number for RCS. And, it will enable, once it gets approved with OTP.

In dual SIM devices, App might ask to enter a phone number. You can do that, by tapping on the retry option. 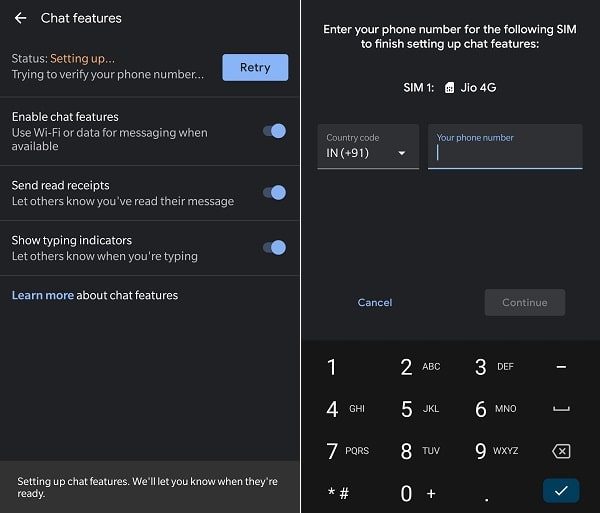 6. Once RCS verification will get done. The status will get change from “Setting up” to Connected.

Fix: Chat features unavailable for this device. Your Carrier does not support this feature.

So, If your device and carrier don’t support RCS. Then, the above error screen will appear after tapping on Chat Features. But, you don’t have to worry about it. With some tweaks, you can still Enable RCS messaging on your Android.

After that, Go to smartphone settings > Apps > Tap on “Carrier Services” > Permissions > Allow all permissions. 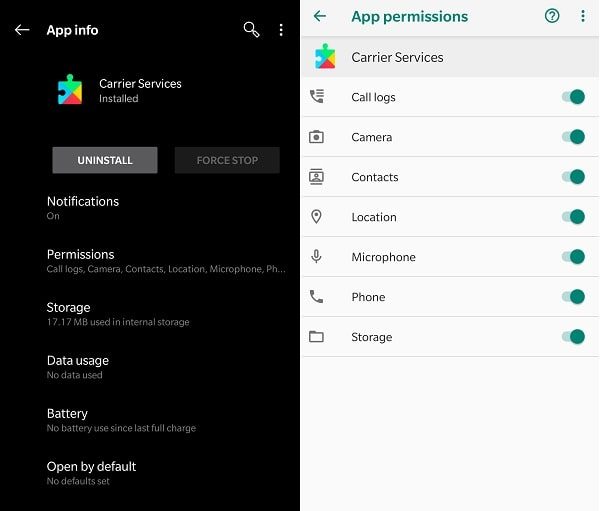 2. Install Activity Launcher App from Play Store. When you open the app, you will able to see all installed Apps.

Look for Google Messages App and tap on it. Scroll down to the list, and you will able to see the “Set RCS Flags” option, tap on it.

3. Now, on Set RCS Flags Screen, under the ACS Url section, tap on it to open the drop-down menu. And, choose ‘“http://rcs-acs-prod-us.sandbox google.com/”, and tap on Apply. 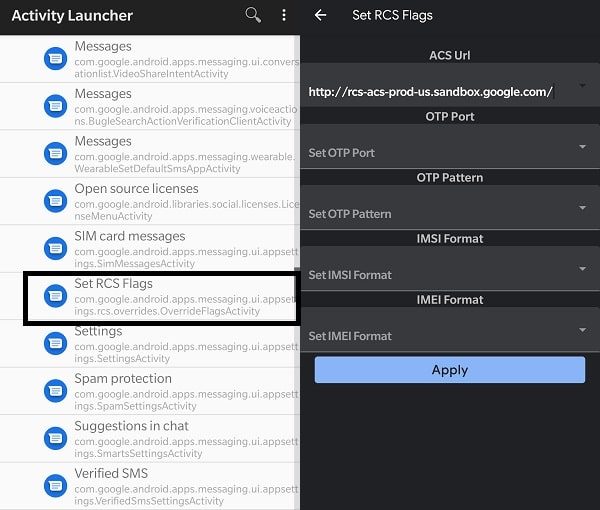 4. Now, launch Messages App, and you will able to see RCS Chat Setup. Which wasn’t available before. If it’s still not showing then maybe settings not applied.

Important: If RCS Setup gets stuck on verification. Then, first, do clear storage and cache of the Carrier Services App. After that, open the “Set RCS Flags” window in Activity Launcher. And, tap under OTP Pattern and choose “Your\sMessenger\sverification\scode\sis\sG-(\d{6})“. And, Apply the changes. Hopefully, verification will get done now. 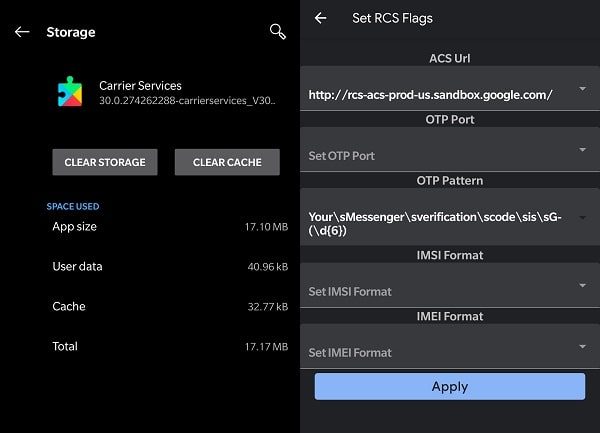 Note: OnePlus users are facing the issue with RCS. This means verification is not getting completed in OnePlus devices. Though, you can still give a try.

How it is different from Apple’s iMessage?.

RCS is completely different from iMessage. iMessage uses the central database to determine other person has protocol activated or not. But, RCS is Google’s feature, so Google does decipher, RCS is active or not. After activating RCS, when you open text in Messages App. The app does silently ping to the chats to find out RCS is enable or not. And, if it gets a positive response then automatically RCS chat will help you to communicate.

So, this was the method to Get RCS Messaging on Android smartphones. Though, we don’t know, how long this trick is gonna work. Maybe, Google stops sending OTP for verification, who knows. If Google will release RCS officially for all users, then it’s gonna be a true MMS/SMS successor. Real-time delivery and read receipts make it a WhatsApp alternative. But, RCS lacks security and user’s privacy. So, as of now, there isn’t a point of this new messaging system. But, if Google succeeds in making it secure. Then, Android will have its own messaging App like iMessage for Apple devices. Currently, RCS also doesn’t support dual-sim phones. So, there are lots of things, which Google needs to fix before launching it officially. What you guys think about it?. Feel free to comment.