How to Install Linux Distros on Android Without Root.

If you’re reading this, then you maybe already know about Linux. Well, Linux is the most-used open-source operating system. And, the term “Linux” refers to the Linux kernel. But with the set of tools, services, and programs bundled with Linux Kernal. Linux becomes a fully functional operating system. And, Linux works in almost every hardware. Even, the smartphone in your pocket can also run Linux. Yes, now you can Install Linux Distros on Android without root.

You must be thinking, isn’t Android Already a Linux?. Well, it is Linux and it isn’t. Actually, the Linux kernel is the core element of Android. But, Android is quite different from a typical Linux Distro. Because it lacks the GNU Interface. And, because of different runtime libraries, Android and Linux Apps aren’t exchangeable. But, because of some brilliant developers, you can now easily run many Linux.

Why you need to run Linux Distros on Android?.

Most people use Linux Distros on Android to gain access to Desktop Environment. And, to access Linux Applications and Tools anywhere. Also, Android devices now have ideal hardware for PC-like experience.

There are many ways to get Linux running on your phone. Previously, with the “Debian NoRoot” application, users were able to install Debian GNU/Linux on Android without root. Well, the performance wasn’t great with “Debin NoRoot” but was usable.

Also, for rooted users, there is a Linux Deploy tool. That allows installing various Linux Distributions. But, for that, a rooted device with an unlocked bootloader is required. There are some touch-based Linux Distros also available. postmarketOS, Maemo Leste and Ubuntu Touch.

But, now you don’t need to root your smartphone. With AndroNix, you can run Linux with minimum fuss. (Android version should be at least 5.1)

IMPORTANT: The installation process takes lots of time. Based on your Smartphone hardware and Internet Speed. So, keep patience. And, it could possible that AndroidNix won’t work on your device. As you know, Linux isn’t optimized for Android. And, for developers, it’s not possible to debug for every device.

AndroNix does provide hassle-free instructions to make your first impression of Linux Distro better. With Linux on Android, you can do many heavy tasks. That’s why, AndroNix lets you install various popular Linux distributions on your Android device, by using Termux. Currently, you can install Ubuntu, Manjaro, Kali Linux, Debian, Fedora, Arch Linux, Parrot OS.

It also does provide a Desktop Environment. (KDE, LXDE, LXQT, MATE, XFCE) Which makes the user experience better. So no need to work using Linux Commands. It’s an open-source project, and all codes are available on Github.

First, Install these three Apps from the Play Store.

As I mentioned earlier, the process takes lots of time. So, Battery optimization can kill the Installation Process.

For Linux Distros installation you need an Android smartphone with ARMv7, ARM64, or x64 device architecture. You can install Device Info or CPU-Z App to check architecture.

1. Open AndroNix App, head over to App’s Dashboard. Here you can see 8 Linux Distro’s which you can install. (I am installing Ubuntu. If you have never used Linux before, then, I will suggest you the same.) 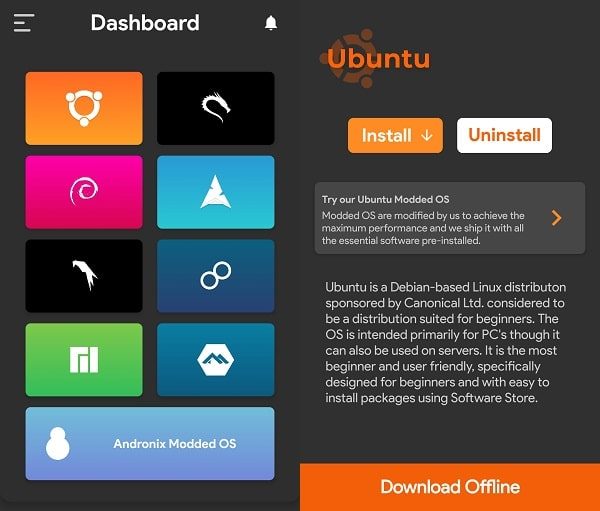 2. Tap on Install, App will ask you to select a Ubuntu version. Select Ubuntu 19, it’s the latest.

An Installation page will now open. Tap on Copy. Ubuntu 19 Installation Command will get copied. (Green mark will appear in front of Copy.) 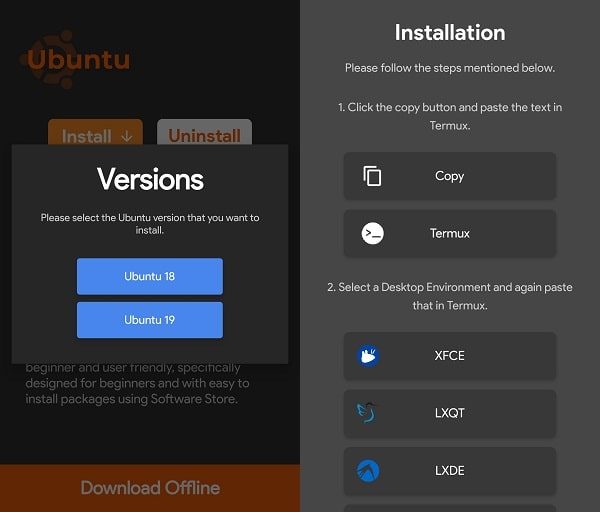 3. Tap on Termux. Termux Window will get open, paste the copied command and hit the enter key.

That’s it, Termux will now download Ubuntu Compressed files. And, it will decompress it after downloading.

4. Once, Ubuntu gets installed. A command will appear to launch Ubuntu. Type that command and hit the enter key from the smartphone keyboard. (In my case, ./start-ubuntu19.sh was the command.) 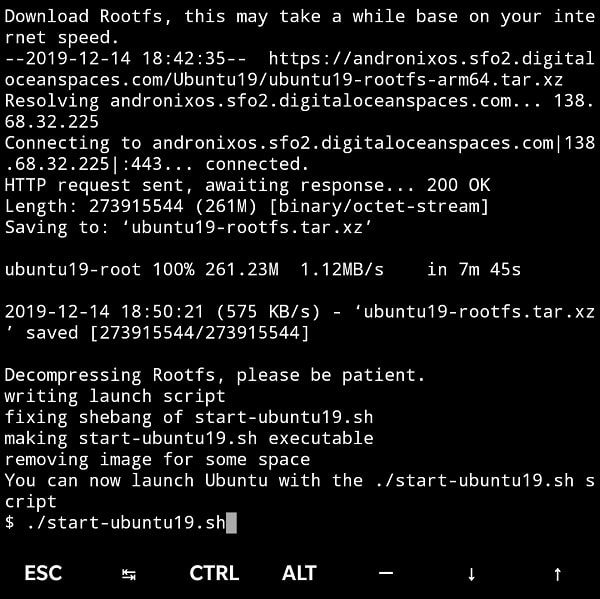 Once, Ubuntu gets started, the root@localhost will appear in Termux. It means, now you have to install a Linux Desktop Environment.

5. Go back to AndroNix App, and from the Installation page. Tap on any Desktop Environment, that you want to install. I am installing “MATE”. You can choose any. 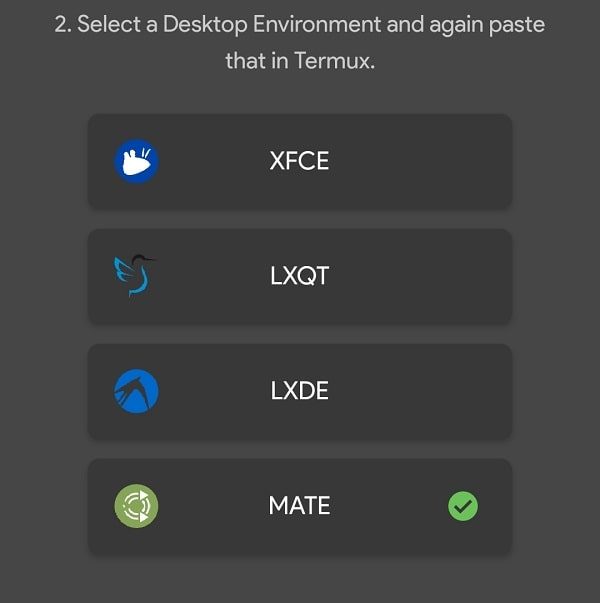 6. Again go back to Termux, and paste command to install mate desktop Environment and hit the enter key.

7. Once, the process of mate desktop environment complete. Termux will ask you to set a VNC password.

First, note down the IP address and port information shown on that page. With that only, you can run Ubuntu Linux on Android. (As you can see in my case it is 127.0.0.1:5901)

After that, enter the password of your choice and continue. (Don’t forget the password and IP Address and Port.) 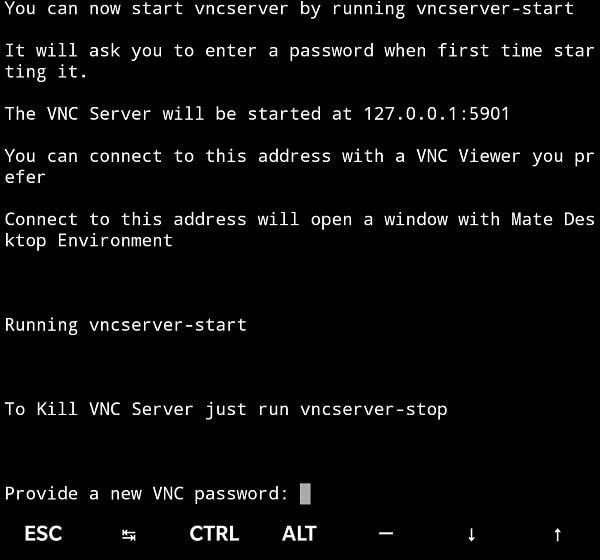 8. The AndroNix VNC-Server resolution selection window will appear. You have to select a resolution to start the VNC server. I have selected an autodetect/dynamic resolution. You can choose the same. 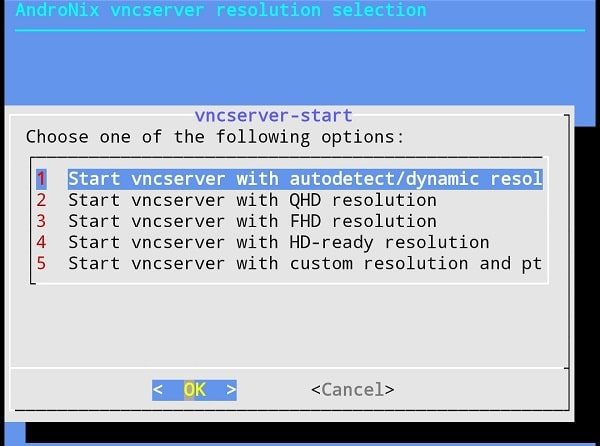 You will now see a message that the VNC server started. 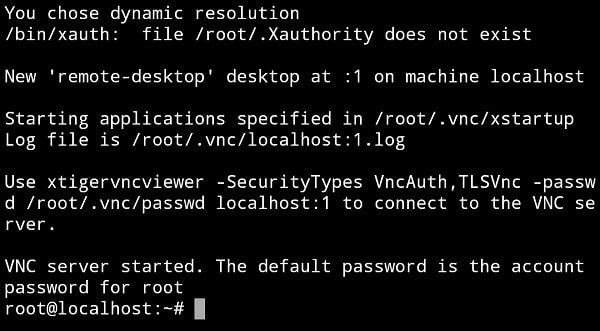 9. Open VNC Viewer App, Tap on the “+” icon. Enter the IP address with port information. And, the name of your choice. Tap on “Create”. 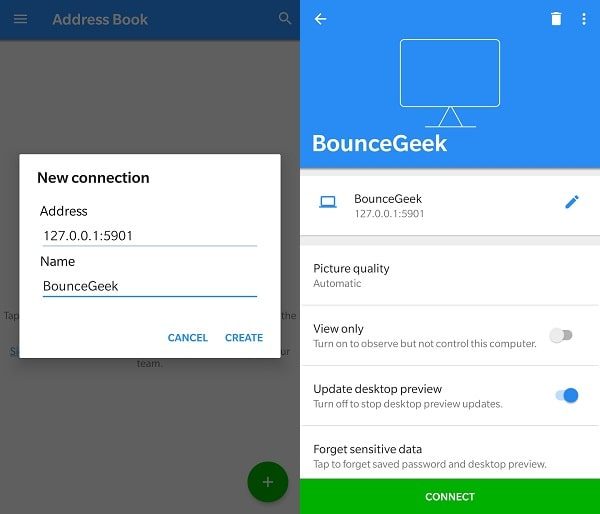 10. VNC Viewer now asks for the password. Enter the root password that you set up before. Tap on Continue. (Unencrypted Connection warning might appear, tap on OK.)

That’s it. Ubuntu 19 will get started. VNC will teach you some gestures to control the OS. 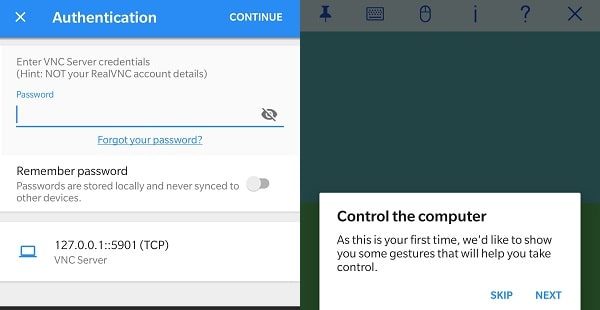 So, this was the method to install Linux Distros on Android smartphones without root. You can follow the same steps, and, can install any Distro available on AndroNix App.